Why does franchising have less bankruptcies than ordinary business?

During the past 15 years, several Swedish and foreign studies have shown the same result; that franchise chains become bankrupt less frequently than ordinary businesses. According to the report made in 2008 by the Swedish Franchise Association an Swedish Trade Federation, franchise companies show both a higher rate of expansion and fewer bankruptcies than ordinary companies. The two diagrams below shows the comparison. 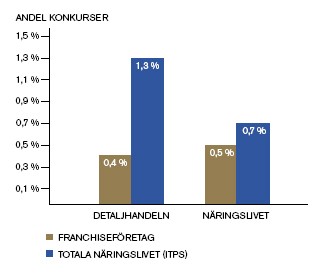 Source: the report ‘Franchising in Sweden 2008’. Made by HUI for the Swedish Franchise Association 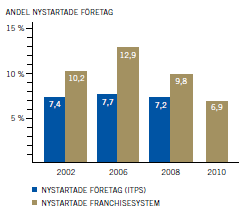 Source: the report ‘Franchising in Sweden 2008’. Made by HUI for the Swedish Franchise Association

The studies that have endeavoured to statistically show the level of survivability of franchise chains, do show slightly different percentages from year to year. However, it is quite clear that franchises have a higher survival rate than other businesses.

One should of course bare in mind that some branches of business generate more revenue than others. This is also true for franchise companies. It follows that companies in a more high yielding branch of business have a higher survival rate. One could let the statistics speak for themselves, but it it is preferable to understand why this is.

The first thing one should consider is that franchisees have virtually the circumstances as ordinary businesses when it comes to financial responsibilities. The need for own capital and securities for one’s loans is often the same as for others. Occasionally the franchisor will provide securities, but this is rather an exception. For most franchisees, the terms will be the same as for non-franchisees. The explanation to the higher survival rate is found elsewhere- It is because the franchisees become part of an organisation that is tailored to guide them through all the difficulties ahead. The following three conditions will explain further.

A franchise should be built on a well tested and demonstrably profitable business idea- All mistakes and miscalculations that the franchisor has identified and remedied means one less thing to the franchisee. The business idea is documented in The Manual which details how the business is started and run. The franchisor knows what capital is needed and what kind of expenses the company can sustain during certain parts of the year. This is of course rarely available to the ordinary business.

Not everyone is suited to running a business. Everyone does not have the financial means to start and run a business. This can seem obvious, but who examines an ordinary businessman before he starts his business? The external exterminators would normally be a bank that lends money, or an accountant. They cannot be expected to evaluate the business side of things, the branch and businessman himself.

A franchisor has knowledge and experience specially adapted to the business idea and branch of business. The franchisor needs to choose the right franchisee. The financial risk that he takes if the franchisee goes into bankruptcy is great. Therefore he puts a lot of work into finding franchisee’s with the right character.

To the one starting a business it is not always obvious how much capital is needed from the start and during the course of the journey. The business owner must often calculate the needs on his own, which is fraught with difficulty. It is therefore common for newly started companies to be under-financed at the start. When the need shows itself to greater later on, it is more difficult to convince banks to lend more money.

In a franchise, the franchisor can calculate the capital needs much more accurately. Both at the start and along the way. Already during the recruitment phase, potential franchisees are evaluated as to whether they will be able to secure enough own capital. When it is time to apply for loans, the right franchisee will be able present relevant material based on correct calculations and enough own capital to be eligible. Thereby, the the chances of securing sufficient finance are greatly improved.

One of the most common causes for bankruptcy among independent businesses is lateness in identifying and remedying problems. Noticing that the company is failing on the balance sheet usually means it is too late. An independent business owner usually only has his accountant and the bank who critically analyse the results. This is often done when the problem has already grown to large.

Control with a progressive outlook is what is needed, in conjunction with the normal follow-up of results. A franchisor should be capable of effective compliance and economic control when it comes to the franchisee. The main aim of the compliance should be to get an idea of how the sale will work out at an early stage. Different branches of business have diverge on how to measure and predict how sales will go. The essential in such predictions is always to see whether any remedying actions need to be taken.

Since the franchisor has access to measurements done for other franchisees, such records can often be reused. If one is up to date with compliance work regarding the key issues for a good sale, any correcting actions can be done in time. This is the key to succeeding as opposed to discovering a negative result on the balance sheet when it is already too late.

The experience, methods of control and ability to use other franchisee’s as reference that the franchisor possesses gives a franchisee much better chances for success.

FranchiseArkitekt are specialists in every aspect of franchising. Our concept is to offer the best available expertise and guidance in whichever facet of franchising a company is in need of such.

FranchiseArkitekt are specialists in every aspect of franchising. Our concept is to offer the best available expertise and guidance in whichever facet of franchising a company is in need of such.